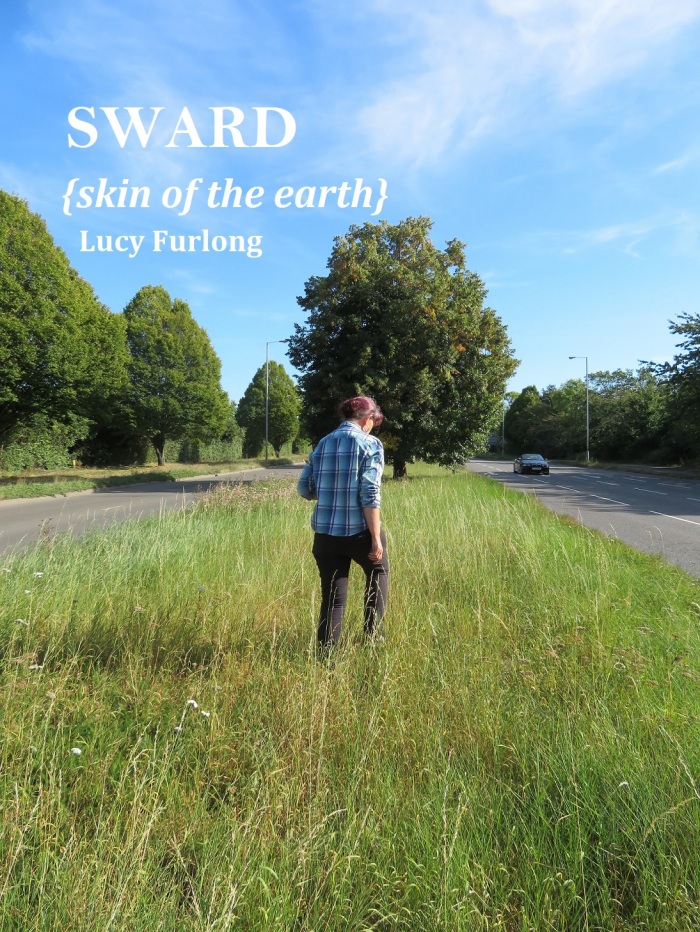 My new chapbook, Sward {skin of the earth}, published by Sampson Low Ltd, is available for purchase here

Sward represents my walks up and down the central reservation of the A240, Kingston Road, from the Tolworth Roundabout to the border of Surrey, where the Royal Borough of Kingston Upon Thames meets the Borough of Epsom and Ewell.

Inspired by Richard Jefferies, the prolific Victorian nature writer, author and walker, whose seminal work Nature Near London contains essays about his walks and observations of Tolworth and the surrounding areas. 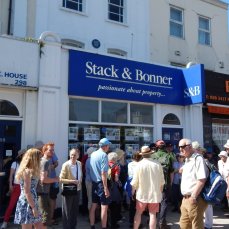 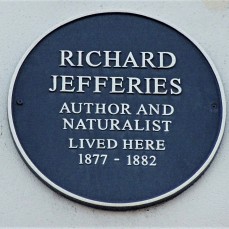 The Plaque at RJ’s house in Ewell Road, Tolworth

Jefferies lived in Tolworth for several years, and last year Alison Fure and myself, as part of our Tolworth Treasure and the Hogsmill Hum project took between 30-40 people on a walk in Richard Jefferies’ Footsteps, aided and abetted by our friend Ben Henderson who very kindly agreed to play the part of Jefferies on the day, and did so with great aplomb, providing us with a sprinkle of magic for our journey.

The walk, which took place on a hot and sunny May Bank Holiday in 2018, was recorded for a show on Radio 4, ‘The Art of Now: Women Who Walk’,  celebrating women walking artists, and we were delighted to be involved in this. 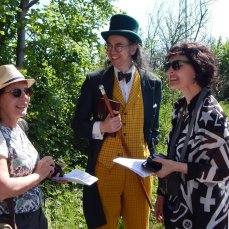 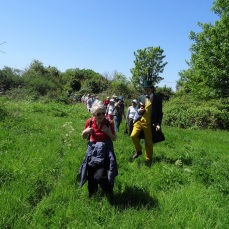 This is my last walking and writing on Tolworth for now, although there may be a couple of essays lurking. My family has lived here for generations, since my grandparents came over from Wexford, Ireland during the second world war, and I have spent the last few years walking and writing and thinking and trying to engage other people in the treasures that exist nearby, before they are lost.

Alison and I documented our walks for Tolworth Treasure and the Hogsmill Hum, and were glad to meet lots of lovely local folk and make new friends, and we continue to walk, write, celebrate and try to conserve the nature on our doorsteps. 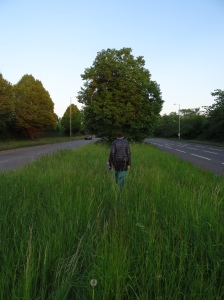 This year I decided to focus on a small patch of nature, a long, thin one, in the middle of the A240 – a narrow but important nature corridor, with grasses, 20-odd mature trees and lots of wild flowers. I named the project Sward after Richard Jefferies’ use of the word in his writing.

Last year this slim but vital patch of nature was placed under threat of being concreted over from one end to the other, as the proposed Tolworth Area Plan wished to see this an extension of the Tolworth Greenway – green stripy concrete.

This central reservation, which helps pollinators and other fauna find their way across the busy road from one green space to the other (Kingston University Playing Fields and Tolworth Court Farm Fields respectively) must be kept and properly managed. It also does an important job of mitigating air pollution – and providing beauty – something we mustn’t overlook!

I was glad that many objections to this part of the plan were received and it has been dropped, but I worry it will happen anyway in increments, as Tfl will be extending the ‘greenway’ to Tolworth Station. Although at the moment this does not mean the loss of all the grassy and floriferous ‘sward’ I have been walking up and down for the last six months – and seeing all my life, it still could be in the near future…