At the wooden bridge, beside

for contents of day-glo

sparkle, we seek out elusive

We graft all afternoon, rewarded

by encounters with small wildness,

through jars held up to the light.

our neighbours of the water;

we send them back before barefoot-flapping,

wet and toasted, up the hill home.

Hogsmill Tiddlers was originally published as one of the poems on my now sold-out Over the Fields map, back in September 2015. It has since been published in The Countryman magazine and is also used in teaching materials for the Open University’s MA in Creative Writing.

I have just pinned Hogsmill Tiddlers to another map, showing the location of the poem, on the Places of Poetry web site. This is an AHRC and Arts Council funded project which “aims to use creative writing to prompt reflection on national and cultural identities in England and Wales, celebrating the diversity, heritage

and personalities of place.”

We still cross the bridge nearly every day on our walks ‘Over the Fields’. Five generations of Furlongs and counting…

A small band of friends and family took a walk Over the Fields yesterday, to help me harvest the new poetry map. A glorious late September afternoon, close to the Autumn Equinox, traditionally associated with the second harvest…perfect timing.
We met at the church and were greeted by the vicar, Kevin, who was very generous in allowing us to wander around the beautiful church that is in his care, even letting Techno the Great Dane have a nose inside, and letting the children have a go on the church organ. 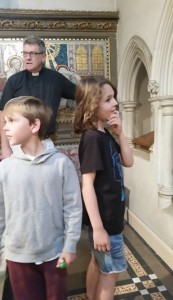 We rambled down the hill into the valley; along paths, over and under bridges, by the river and through fields, stopping at various points to read poems. Thank you to Dad’s friend Roger White, who grew up and played in the fields too. He read us two pieces of writing he had published back in 1960, which was a great addition to the occasion. One about the Hogsmill River, published in his school magazine, and the other, a small clipping from the Surrey Comet, a news story about a local ‘incident’, which took place in 1959…

Thank you to the family and friends who have helped me to make this new map, and who have been so kind and generous with their time, skills and support. Thanks to Bill Mudge, who recently took photos of me over the fields as I was finishing the map and taking a last walk there before signing off the final proof at my friend Mel’s studio. (Mega thanks to Mel- the map wouldn’t exist without her) Bill has kindly allowed me to use his photos, and a couple of them are on my web site. You can find more of Bill’s work here – the photos of me and Mel are part of his project 20 in 15.
The map is officially ready to find its way into the world, and with a bit of luck will help people wend their way around this patch of ‘green’…maybe you will be one of them…?
You can buy the Over the Fields map HERE, right now, and the first 25 people to order one will also get a FREE limited edition postcard (1 of 50) with a brand new poem which is also connected to this area, but not on the map… Your journey begins here!
There may be other walks – please ‘like’ my Facebook page for updates. 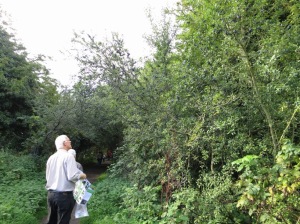 I’m really excited about this workshop and have been designing new writing exercises and ideas for families to try out. The title came about yesterday, when I was at the park with my son, looking for the first conkers of the season (see below!). We were talking about Autumn, and what it meant to my son who said: “It’s the most Nature-ish season, Mum.” As this workshop is all about the words we use to describe our experience of nature I thought I would borrow this lovely thought…and lo and behold…Nature-ish it is! I hope to see you there…

This event is part of New Malden Arts Festival which takes place from 7th – 20th September and promises a wide range of events and activities for people to get involved in. More info here. 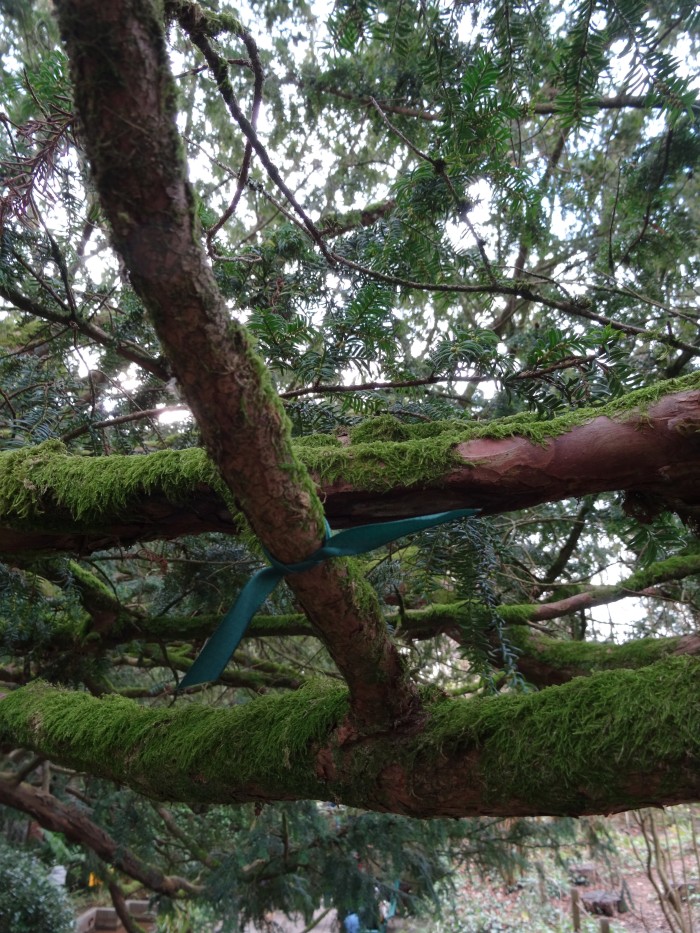 “Never pounce on a porcupine!” was my son’s conversation opener this morning- wise advice, nice use of alliteration- and the perfect way to start this post, my first of 2015.

The word alliteration has been added to the latest edition of the Oxford Junior Dictionary- however porcupine has been removed. Can you pounce on ‘a rodent with a coat of sharp spines, or quills’? Probably- although you would be foolish to do so- and the alliteration does not exist without the word porcupine. How much meaning is being lost in removing this one word, which tells us, rather delightfully,  all we need to know about this creature? The same goes for the word piglet – it is no longer in the Oxford Junior Dictionary- it has been removed. Where would Winnie the Pooh be without Piglet? Piglet’s favourite food is acorns– or as he refers to them, “haycorns” – another word which has been deemed irrelevant to children’s vocabulary in the 21st century. Alliteratively (and poetically): Pink Piglet- yes…Pink Baby Pig- No….

Acorn comes from the Middle English- it is a very old word which we have been using for hundreds of years- but will children now refer to acorns as ‘fruit of an oak, consisting of a single-seeded, thick-walled nut set in a woody, cuplike base’? No- because, according to the Oxford University Press, who publish the Oxford Junior Dictionary, these words have been removed to make way for words which are more suitable and relevant to the indoor and technology-focused lifestyles of children now.

primrose is another word to have gone from the OJD

This erasure of nature-based words from the Oxford Junior Dictionary is not a new situation- but has received more press coverage again recently. Religious and magical words (bishop, goblin, elf, sin) removed in 2007, have been added to with words such as catkin and even conker, in the 2012 edition. Words that in my opinion are still intrinsic to childhood itself, and to our relationship, education about, and understanding of the natural world around us.

The Guardian ran a piece on this in January, and many writers including Margaret Atwood and Michael Morpurgo have written to the OUP regarding this worrying state of affairs.

As a poet and a writer who writes about place, and as a mother of a seven year old, I felt determined to do something to raise awareness about this but until this weekend I wasn’t sure what that would be.

But…this weekend I went to Glastonbury to meet up with dear friends and celebrate Imbolc with them, also known as Brigid. Brigid or Bridie is the Goddess of Inspiration, Blacksmiths, Fire and also Poetry. This is a celebration of the First Stirrings- where the begins of growth are apparent: in snowdrops, the first lambing, and green shorts daring to peek out in the freezing weather. 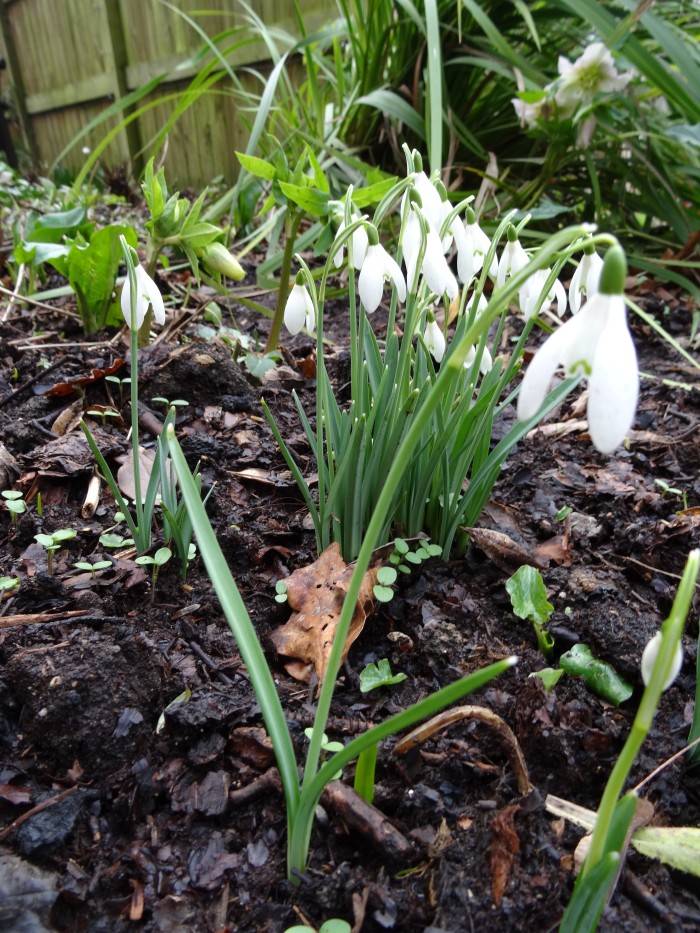 After the celebration at the White Spring, we came out into the bright, watery-sun morning and gathered in a circle across Well House Lane, between the White Spring and the Red Spring at Chalice Well. There was an open invitation for people to share their thoughts, inspiration, songs and poetry. This is an event I always try to get to, as it is a great way to begin the year proper, and is a joyful meeting of like minds and community, in the best place to be. 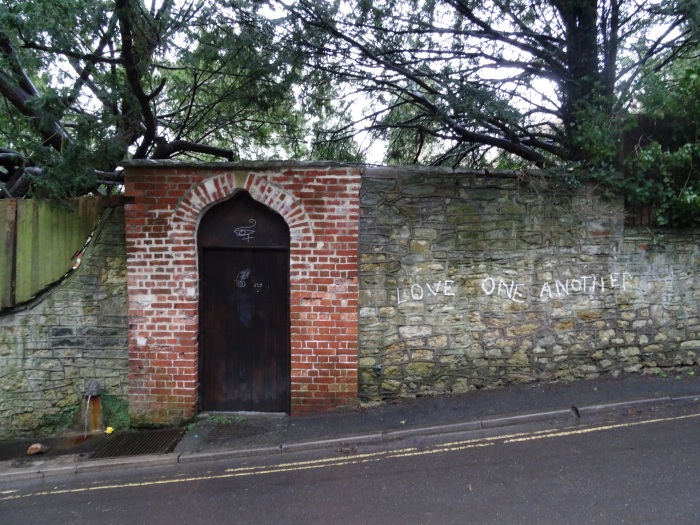 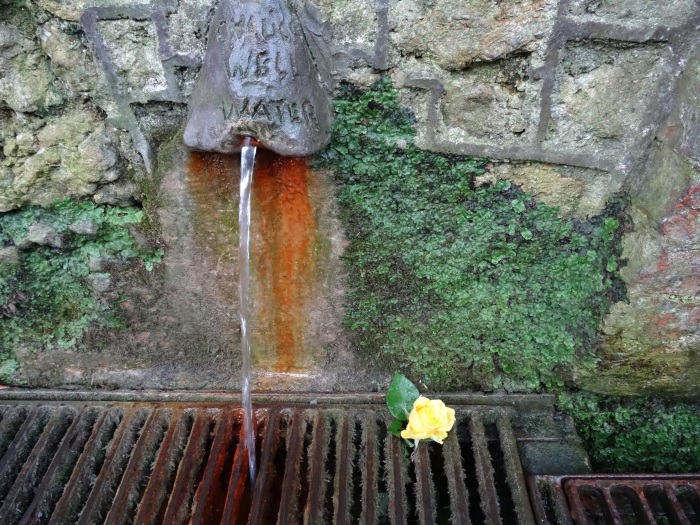 Some amazing poetry was performed and read, a wonderful guided visualisation was offered, inspirational stories were told, and the ever-joyful Hemp man was there to impress the gathered throng with the benefits of hemp consumption and production.

I had chosen two poems to read, and thought I had neatly folded them into my bag, but on arrival realised I had left them behind. I was disappointed for a moment but instead I found the printed list list of nature words which have been removed from the Oxford Junior Dictionary lurking unexpectedly in my rucksack. It was after Lisa Goodwin performed her fantastic poem, which included the repeated line What would Bridie Do? that I knew I had to do it.

She asked if anyone else would like to contribute and I stepped into the circle and explained that the Oxford Junior Dictionary had removed a significant amount of nature words, and that as this was a day for poets, language and inspiration, that this seemed the right place to say some of them, and would everyone repeat them as I spoke them?

Here are all of the words, with the ones I remember saying, shouting even, highlighted. 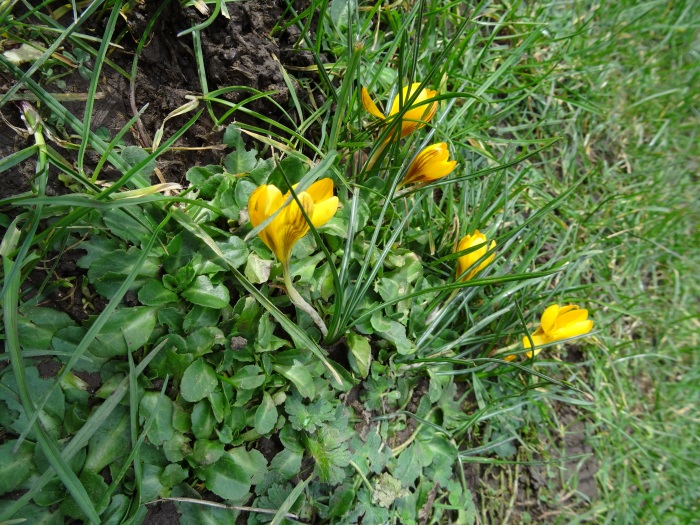 crocus- omitted from the OJD

I picked them out randomly, and in the moment but as I stood there and said them myself, and heard them come back at me, with the audible surprise and indignation in some people’s voices, I realised the power and meaning attached to these words, especially to people who feel spiritually connected to nature, to the earth, to the turning year, to the seasons….

I am very glad I did it, and afterwards, as we walked through the side gate into Chalice Well, and headed towards the warmth of the fire, and cups of coffee and ample blocks of delicious banana cake, a few people approached me to talk about it. So if a few more people know about this then these words will be fought for more fervently, as they should be.

This is how we communicate our connection to nature, as well as claim our heritage and our traditions. For example think about what the word ‘conker’ conjures in you…. 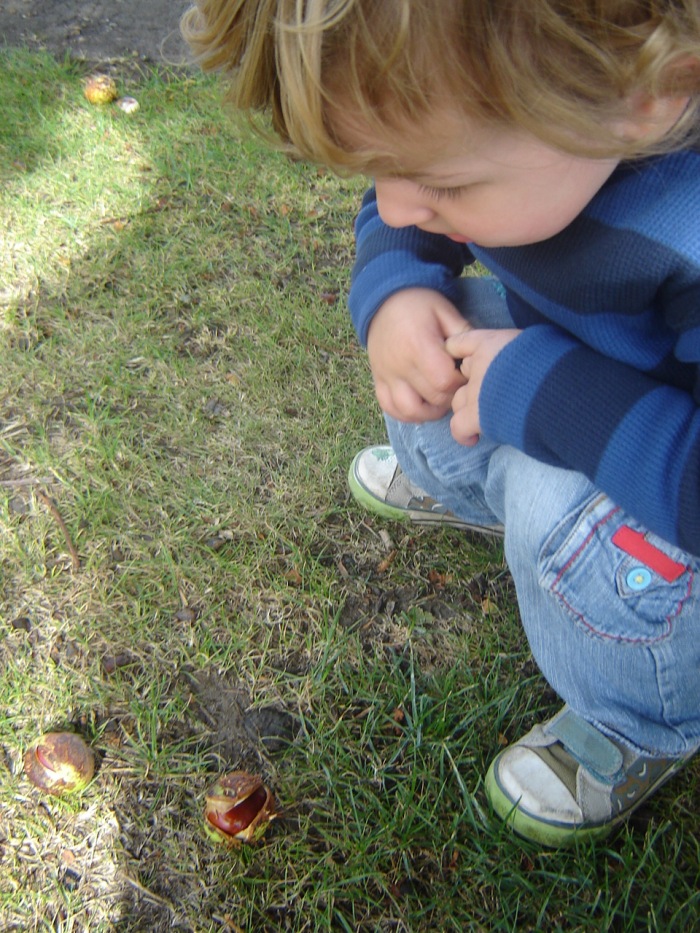 the words won’t die because they aren’t included in one children’s dictionary- but it is symbolic and symptomatic of the disconnection with nature that is not only happening but also apparently being accepted as ‘normal’ in many sections of society. George Monbiot wrote a great piece in The Guardian about children losing their connection to nature and the future implications of this, which is worth reading.
After my nature-word incanting at the weekend my aim is to explore some of these words with my son this year and post the results on here from time to time.
I hope that OUP reconsider their decision and send out a positive message by putting these words back into the next edition of their junior dictionary. For updates on the campaign to bring the words back, this is the place to go: http://www.naturemusicpoetry.com/campaigns.html 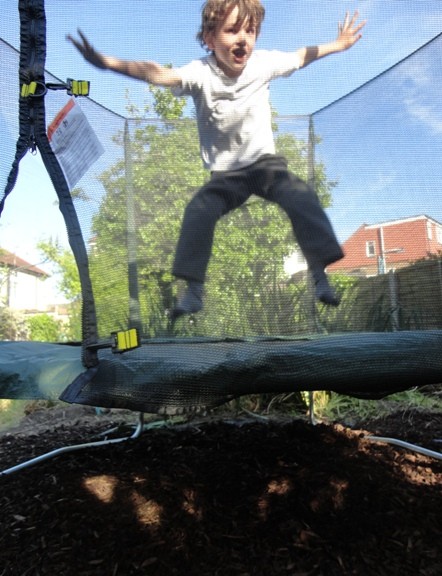 The trampoline arrived yesterday and my Dad spent this afternoon assembling it. One very happy little boy has bounced himself silly this evening. I had a great time jumping up and down too! Still plenty to do but it’s wonderful to have achieved this part of the plan for the garden. I am hoping I can tend to the next job of clearing and digging over the veg patch while my son entertains himself being Zebedee...