It was my son’s sixth birthday recently and his dad and I managed to clear and dig over a large enough patch in the wilderness garden to be able to put a trampoline there, which was his main present. It made such a difference to have two of us working and we cleared the space and dug it over in less than a day, getting rid of as many brambles and bindweed shoots as possible in the process.

It is now covered in heavy duty weed matting and bark. I just have to finish it off now and assemble the trampoline (yikes!) but have been busy writing assignments for my teaching qualification. Soon though, and then the small matter of sorting out the veg patch…and the rest of it…

I’ve started digging the garden again, after a few of half-hearted attempts in the last couple of years. This time I am going to try and re-reclaim the veg patch and clear another patch so that my son can have a trampoline.

Back in August 2009 I decided to tame the really wild patch at the end of the garden and turn it into a veg patch. You can see my efforts at the blog I devoted to this, Roar Earth. By August 2010 I was harvesting tomatoes, lettuce, cucumbers, kohl rabi, beetroot, beans and other delights. And later on that autumn I had a haul of courgettes, giant marrows, pumpkins and even one perfectly formed butternut squash!

It was hard work and I accomplished most of it by myself, with a bit of help from my niece and one weekend when a couple of old friends came down and did one solid day’s work which would have taken me another couple of weeks on my own!

But later on in the winter 2010, after being constantly ill with various bugs and viruses which I couldn’t shift, I was diagnosed with post-viral fatigue, and told to have complete rest. As a single parent in my final year of a degree this was bad news. The worst thing about it was being told there was no guarantee I would get better and that in fact I might get worse, oh and no treatment either… 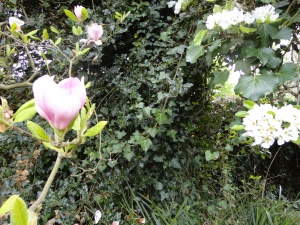 I was pretty depressed about this, friends rallied and I wrote about it a bit. Then just after christmas I slipped while out walking with my son and friends and broke my wrist. At the time it felt like the last straw. It meant I couldn’t drive, couldn’t do lots of things I was still trying to do despite my doctor’s prescription of rest- how do you have complete rest when you are a single parent with an at-the-time three-year-old?

My father stepped in to help and I rested, put all my university assignments off, and did huge amounts less than I had- and started to feel better. Good days and bad. Then more good days but ever since I have not been able to do as much as I used to- so digging the garden had to drop off my agenda.

Last year I started running using the Couch to 5k podcasts available free from the NHS –SAVE THE NHS–  and discovered I could run and that it helped my lower my stress levels and improved my energy. In September I ran 5k for Trees for Cities, and was hoping to run 10k for them at the end of May but have been too busy completing the postgraduate degrees I am currently studying, too tired and too flipping cold until recently. My aim is to start again this week. 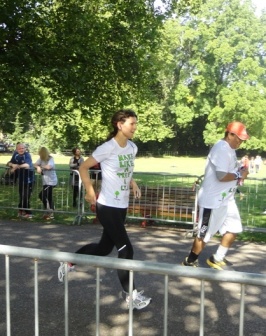 I really want my son to have a trampoline in the garden, which is the main reason I have gone back out there. But I am also desperate to grow some food again, especially as prices are skyrocketing and I have no money, and I would rather grow my own anyway, if I can. I still get very tired sometimes but I think I am ok and pretty healthy, so I feel very lucky. However my plan is to tackle the garden an hour or two at a time, a few days a week, and see how it goes. I may have some help later on which will be fantastic – but I also quite like pottering away out there…it’s great to be doing it again.

The last two weeks has involved mainly cutting down massive brambles, pulling up nettles where they are not wanted, and turning over some of the ground. I have cleared one small raised bed and that now has beetroot and chard sprouting in it.

I have no time or energy to blog much at the moment. I am too busy doing the groundwork for the poetry collection I am working on and the PG teaching cert I am trying to keep up with. Things are changing, changing, changing… thank goodness. I wish I could get out more and get to a few of the amazing variety of poetry events in London but I can’t. And spending a quiet weekend at home with my son has been wonderful and we both needed some time to hang out together and not do very much.

Since I started the original LucyFurLeaps blogspot back in the depths of 2008 (?) I have been daring myself to leap further and have continuously challenged my boundaries. Sometimes I have leapt too far and needed time to recover; but I have also realised most of the objectives of my Five Year Plan, which is now coming to an end.

Now I have to work really hard over the next nine months to get the qualifications I have been focused on for so long.

Then things will get interesting…

I’ve met some lovely, talented people at university this year. Here is one of them. Nikki Dekker is a gifted poet, translator, writer and thinker, and also made me a wonderful wol for my birthday. 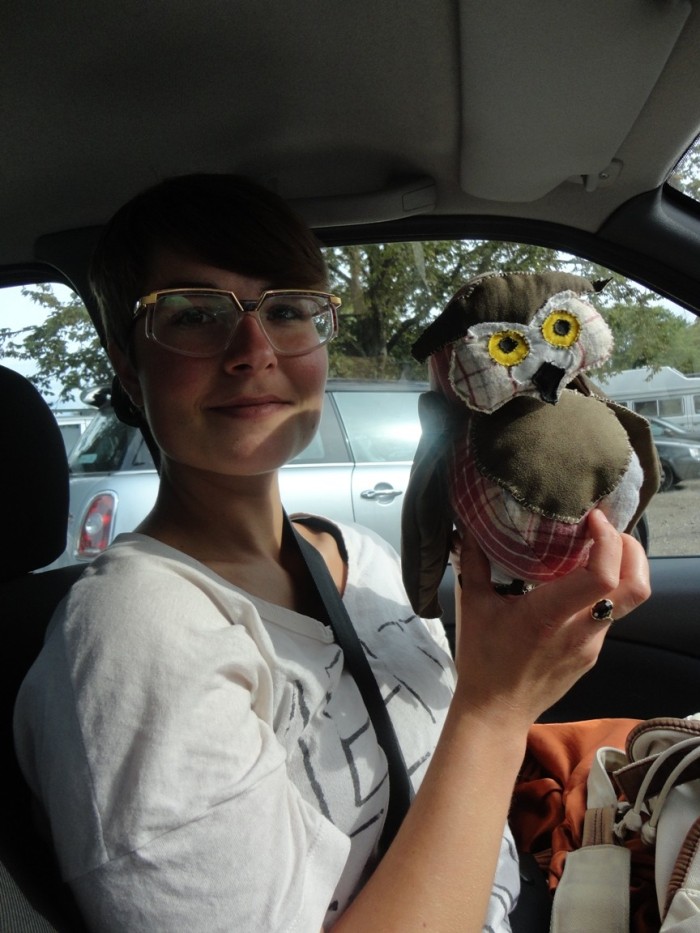 She’s finished her year at university in the UK and has just returned to her native Netherlands. Check out her blog and the films she has made with the Philosophy Now team. 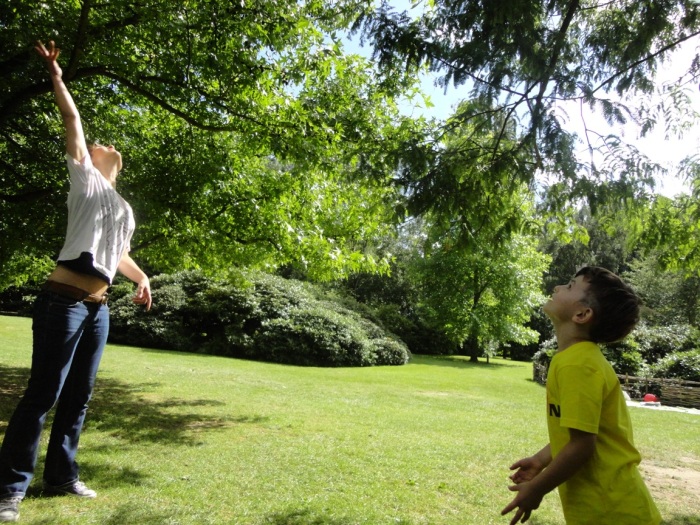 Saw this in Bloomsbury yesterday- nice work whoever…

I am just starting to plan and research the dissertation I will write this summer. At the same time I seem to be having a freak out about how on Earth I will earn a living to support me and my son at the end of the five years’ studying I hope to complete by September 2013. Things are changing so fast and all in the wrong ways. This morning someone told me about the sixty jobs advertised by Primark and the 4000 applications received…. we are 15% into the austerity cuts and nobody will say out loud that we are suffering a depression. There is no need for any of it.

Noticeably more beggars on the street in London and the soup kitchen queue by Coutts is bigger every time I see it….

This week I handed in the final assignment for this year whilst battling a stomach bug, a household scratching with nits and organising J*b*l** outfits for school parades. What a relief – apart from the nailbiting until I get the marks back. By then I will be focusing on the 15000 word dissertation and 3000 word methodological essay I will be writing over this Summer.

I’m exhausted as usual and could do with some time out where I can go somewhere very quiet and sleep and not do much for a day or two but I doubt that will happen. I am very blessed to be able to do what I am doing and to be doing it next year, although I am anxious about whether I can fit it all in. I have been studying full time for four years now and it’s been a life-changing and fantastic (for the most part) experience.

Juggling everything with my son is a constant challenge, and now more than ever since he started school. Logically it should be easier, dropping him off at 8.45am  five days a week and collecting him at 3.15 should give me more time. But it hasn’t worked like that. When he was at pre-school 3 days a week he was there from 9 til 5 and I’ve come to realise how precious those two extra hours are when you are trying to write. Quite often I will just be getting into my stride when I have to stop everything. Then there is the endless paperwork, letters, collections, homework, costume making, parents’ evenings, meetings, events etc.

Actually his school is fairly light on all that stuff, it’s a small school with a not-terribly-active PSA, so it could be more extensive than it is. I wish there was more going on for him there. It’s a nice little school and he is doing well. He’s made some great friends, as have I. I have wrestled with the idea of getting more involved in helping out at the school. I go and read once a week which I adore but I wish I could do more. And I might… I keep holding back because of the university workload.

I’ve also been tutoring my son’s friend’s teenage sister, who needs some extra support with her English GCSE. This has also been a fruitful experience – I’ve enjoyed it much more than I thought I would. It has been an education in how kids are taught now…and how to teach.

Probably the best thing about uni this year is that I’ve met some lovely, talented people on my course, writers who are as serious about this madness as I am. I am now in the fortunate position of having a writing support group of amazing poets and prose writers! Hip Hip Hooray for that!

Once again everything has been thrown in the air and I have been running about with my head up looking to see where it all lands again, without bashing into too many trees or lamposts or people in the meantime…

“A record of my feeling, that I live, that I breathe. My poems were that, and hence: hymns of gratitude. And at the same time, I was conscious of misfortune, of being injured. And nothing in me was spontaneous, but under control of the will.”

Czeslaw Milosz (1911-2004) was awarded the Nobel Prize for Literature in 1980. I was lucky enough to be introduced to the work of this amazing poet by Fiona Sampson, who taught the poetry part of one of my modules this semester.